No more running around at Good Year Seafood Village 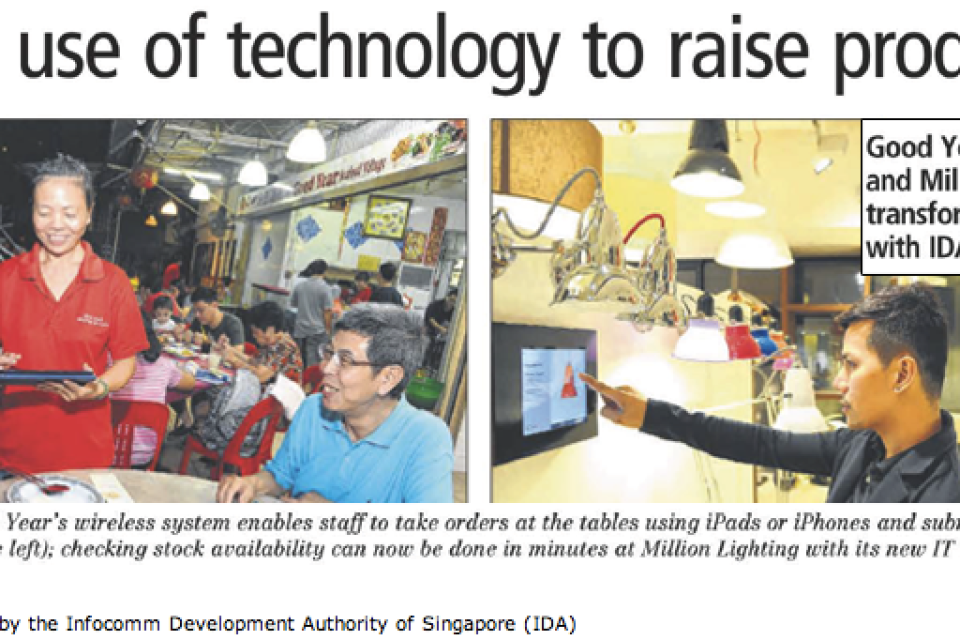 Located along a laid-back stretch of Tampines Avenue, Good Year Seafood Village becomes a bustling hive of activity during meal times, especially on weekends when the crowds descend for its signature assam and curry fish head, pepper and chilli crab, and bak kut teh. Spread over 4,000 sq ft. the eatery can seat up to 400 people during peak periods. Despite this, customers usually do not have to wait for a table, and the food arrives within 25 minutes. It was not always this way, recalls one of Good Year’s directors, Alan Peh. “In the beginning, we were operating like a typical zi char stall,” he says. The staff would fill in order slips -different order slips for seafood, bak kut teh and drinks – and literally run to the different stations so that the kitchen staff could prepare the items.

The use of handwritten order slips also led to mistakes, with kitchen staff sometimes misreading orders when preparing the raw ingredients, leading to delays and wastage. “As we went along, we realised that this couldn’t go on,” says Mr Peh. The processes were inefficient, and the challenges were compounded by high staff turnover and difficulties in hiring new people. To address these issues, Good Year started looking for a wireless system that would allow its staff to take down orders electronically in Chinese.

It came across Lavu, a cloud-based Point of Sale (POS) system from Kidotech (Kido Technologies Pte Ltd) that could be used with the iPhone, the iPad and the i(Pod)Touch. As an approved POS system under the iSPRINT grant, qualified software and implementation costs were supported by IDA. With a 30MB Next Generation Nationwide Broadband Network fibre optic link providing a stable connection to the cloud and a wireless network covering its entire premises, the system enables staff at Good Year to take orders at the tables using iPads or iPhones and submit them directly to the different kitchens.

The iPads also serve as POS terminals. “When the customers ask for the bill, we can show them their bill on the iPads and collect payment on the spot,” notes Mr Peh. Mistakes due to handwriting issues have also been reduced. “Nowadays, we come across fewer mistakes, and it has helped us to cut down on cost and wastage,” Mr Peh adds. He estimates that productivity at Good Year has increased by about 30 per cent. Waiting time for customers has also been reduced by more than 50 per cent. For example, during busy weekends, customers used to have to wait 45 minutes to one hour for their food. Now the longest waiting time is between 20 and 25 minutes.

“In the past, we didn’t feel confident enough to increase our capacity during peak periods even though there was a queue. Expectations from our customers were high, and once they sat down, they would expect the food to arrive in a short while. We were afraid we couldn’t cope with the workload. But since we’ve had the system, we’ve been able to increase capacity by about 40 per cent while still providing customers better service.

Most of the time, people who come in will get a seat almost straight away.” The system has also taken the pressure off Good Year to constantly add people, despite continued business growth. “We now have a more efficient system in ordering, the orders are more accurate and there is no manual calculation required during payments,” says Mr Peh.

“All these have improved our service and custamer satisfaction and allowed us to retain our staff as they are more productive with less manual work.” Besides these operational benefits, the POS also enables Good Year’s management to monitor its performance remotely, and in real time. “From time to time, when we introduce new dishes, we can see straightaway whether they are well-received,” adds Mr Peh. “Now we know the daily turnover, the weekly turnover, and we can actually break down the numbers to find out how much each person spends, which items sell and which ones do not. All this helps us a lot with our business planning and decision-making.”

LightSpeed is the complete retail Point of Sale solution for single or multi-store operations that combines Mac innovation with powerful backend business tools, a streamlined POS interface for fast front-counter sales and a tightly-integrated Web Store for selling online.